Shaazia woke up only after snoozing the alarm for the third time. Today was her first day of her job as the Happiness Officer at an electrical transformer factory and she was already late. Unmindful of the reprimand from her boss she stayed unrushed during her breakfast ritual of pancakes with maple syrup gifted by her Canadian uncle. Her manager had recently joined and had taken up the responsibility of taking care of people across the 7 factories that her father owned. He was her father’s friend who was helping out and was probably annoyed by her tardiness but did not reprimand her. That was a good start to the six years she spent under his tutelage.
A plump girl who had just finished 3 years at Mumbai’s prestigious Sophia College could have very well walked into a wedlock, but bigger things awaited her. Even her aborted UK education might have been just a calculated misstep to the foundation of her first fitness studio in Dubai. The PAD is a labour of love quite literary enjoining the mantra of fitness she embodies and the passion for dance professed by her husband Abbas. PAD is the acronym she coined to incorporate Pilates, Acupuncture and Dance and while the P & D are well entrenched, she is yet to introduce the A of Acupuncture.
Back to our plump girl sweating it out for 6 months at the various factories trying to understand more about employee happiness. Entering the staff canteen raised many eyebrows not because she was a woman, but because she was the owner’s daughter who was getting her hands soiled with employee affairs. The food across all canteens was much better in a matter of weeks after her arrival and so were the living conditions and other staff amenities. With the help of her mentor, she was able to transform her father’s factory from a profit-oriented to a people-oriented workplace. By the time she moved out of Mumbai, she had raised the respect and importance of the HR activity to a level where her mentor’s replacement was a qualified HR professional from a Tata company.

Shaazia Qureishi Kanchwala come through as a transparent and delicate girl true to the literal meaning of her last name – one who sells mirrors or glass. Meeting her is like walking into a tornado of unbridled energy. You cannot but get infected with her bubbliness and positive aura. Speaking to the author for the E-Move magazine feature story Shaazia goes back and forth into the past and the future unravelling bits of her that she has probably forgotten. She was candid enough to admit that losing her fat was not a natural process but once she got slim, she has been the epitome of fitness and in her line of business this is only expected. Practice before you preach is a success mantra to respect if you run Dubai’s most upcoming Pilates Studio.

She was candid enough to admit that losing her fat was not a natural process but once she got slim, she has been the epitome of fitness and in her line of business this is only expected.

The PAD was conceived not just as a Pilates and dance studio but also a place to chill out. Most gyms are like factories for toning bodies and Shaazia wanted to create a place where fitness is a lifestyle, a place to hang out with friends and share gossip. Inspired by her aunt Yasmin Karachiwala, who is a famous trainer for Indian celebrities, she roped in her husband to open The PAD at The Onyx in Greens off Sheikh Zayed Road. Shaazia trained with her aunt and then went with her to Arizona to certify as a Pilates trainer. She says to have found her calling and working with her spouse was not by chance but something she worked on to make it happen. 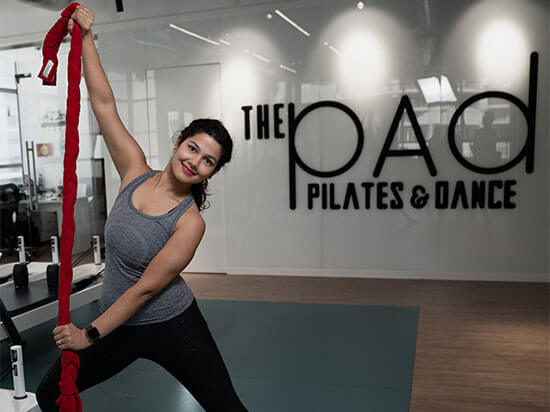 The PAD was conceived not just as a Pilates and dance studio but also a place to chill out. 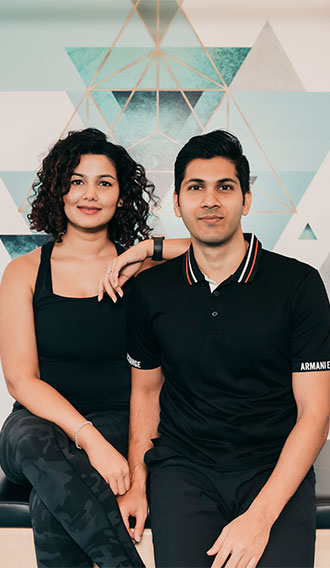 As a daughter she knew only one side of her father, but when she started working with him, she saw the other facets of his personality and acumen. She saw the businessmen that he was, the strategist and the manager. Her respect for him multiplied each time she interacted with him, and she secretly hoped that her mother too could see her dad at work. Shaazia believes that our best wins happen at work and if our spouse could see our best self at work, it would lead to a stronger and longer bond. Working with Abbas at The PAD has helped her realize the benefits of togetherness.
As a teenager Shaazia transformed herself from a plump carefree girl to a serious and level-headed HR executive. She transformed her father’s business from a profit-only outlook to a people focused company. She transformed the employee relations office to a proper HR Department led by a HR professional. The PAD is helping transform the lives of many giving them options to live a healthy and fit life.
Recently she moved from a two-bedroom apartment to a three-bedroom apartment in the Greens and though the move was in the same vicinity she cried while packing her things. The thought of leaving her apartment made her sentimental and when the last carton was moved out and she had to lock the door, she cried again. You carry your memories in your mind, and even if you are moving your favorite sofa to your new place, the emotion will not be the same as earlier. You cry because the time you spent in your earlier house has locked those memories in those moments.

She is all praise for the E-Movers team that did the move while she and Abbas just relaxed. She said “We were like spectators in a cinema watching the house being moved. We had to do absolutely nothing.”